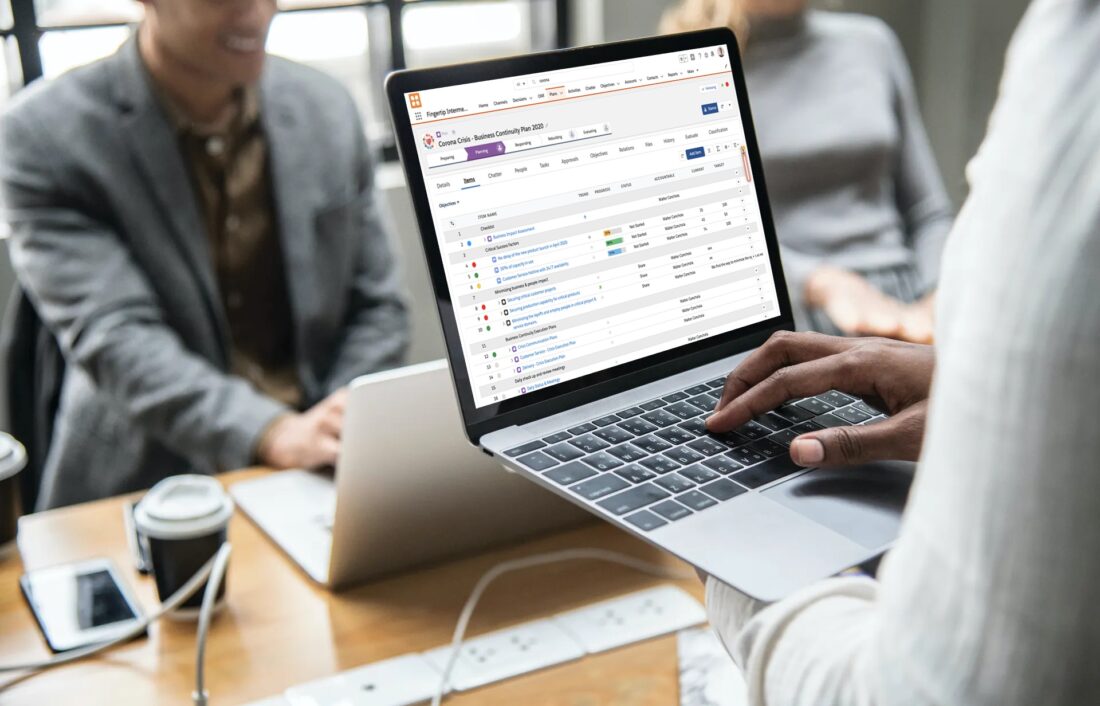 Setting targets, goals, objectives – you name it – has been a quest of modern organizations for about 70 years. Let’s have a closer look at the history and evolution of the goal-setting methodologies to understand how OKRs became so popular.

SMART goals were developed by George Doran, Arthur Miller and James Cunningham in their 1981 article “There’s a S.M.A.R.T. way to write management goals and objectives”. Already in the 90s the acronym Specific, Measurable, Attainable, Realistic and Timely (SMART) gained popularity for especially personal goal setting. The very same principles for formulation of objectives are used for example in the OKR framework which will be explained later.

The Balanced Scorecard (BSC) was originally developed in 1992 by Dr. Robert Kaplan of Harvard University and Dr. David Norton as a framework for measuring organizational performance using a more balanced set of performance measures. Traditionally, companies used only short-term financial performance as the measure of success and now also the customers, processes and learning were captured. However, maintaining BSCs was often too complex without digital systems and the need for agility surpassed the era of BSC by the early 2010s.

When Marc Benioff back in 1999 founded Salesforce, he refined a management guideline based on MBO and BSC methodology he learned at Oracle into V2MOM. V2MOM stands for Vision, Values, Methods, Obstacles and Measures and is a top-down value-driven alignment methodology and has guided every major company decision at Salesforce from day one. It is widely used by Salesforce and some of its ecosystem companies.

Steven Covey became famous with his book The Seven Habits of Highly Effective People (1989) and later in 2012 he introduced the 4DX principles and practices in the book “The 4 disciplines of Execution” to bridge implementation with team engagement and goals. Wildly Important Goals (WIG), acting on lead measures, keeping compelling scoreboards and creating cadence of accountability are the four disciplines elevating the previous goal management approaches. 4DX has its merits, but it lacked the purpose and self-direction requested by the younger generation workforce.

Objectives and Key Results (OKR) is one of the newest entrant in performance frameworks, but it also has a long history. In 1968 Andy Grove co-founded Intel and while CEO he developed MBO into the OKR we know today. In 1974 John Doerr joined Intel and learned about OKR. Later Doerr went on to join Kleiner Perkins Caufield & Byers, one of the first major investors in Google and became an adviser to Google in its very early days. Doerr introduced OKR to Google’s founders, Larry Page and Sergey Brin, who implemented OKR them. Google is one of many successful organizations still using OKRs today. 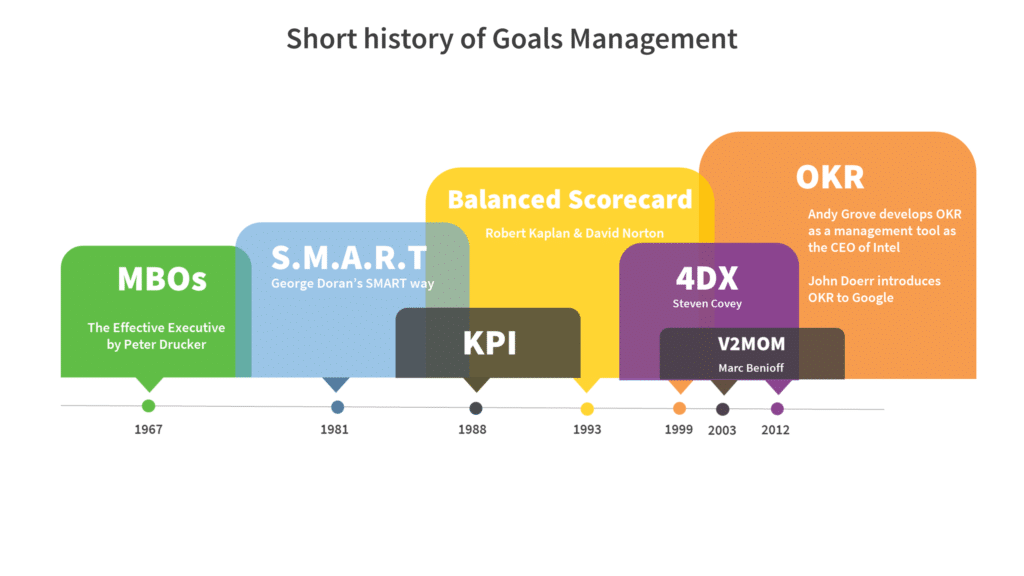 The merits of OKR base on the wide acceptance of the framework, but it is criticized for its waterfall approach, for being difficult to adopt, for missing proper tools to reduce overhead in follow-up and for requiring self-directed individuals. Thus, OKR framework has gone digital and many different spin-offs now exist. One guideline is to not just do what others do, but to do what works for your organization.

Fingertip strives to integrate objectives to the daily work and empower employees to align ambitious personal achievements with the company’s success. We want to drive performance like never before. For this reason, we have studied the science of OKRs in relation to decision making and developed an easy to use digital tool to serve the purpose. Quite uniquely, we link the hopes and needs of the employees and the leaders ultimately leading to reached objectives and targets.

The core of OKRs is to create qualitative, measurable and inspiring goals which align daily work with the organization strategy and systematically follow up success to develop new, better targets and make ourselves accountable.

Whatever the framework in use, the purpose is to

This is the way to drive value creation and impact, and succeed in today’s complexity and turmoil. 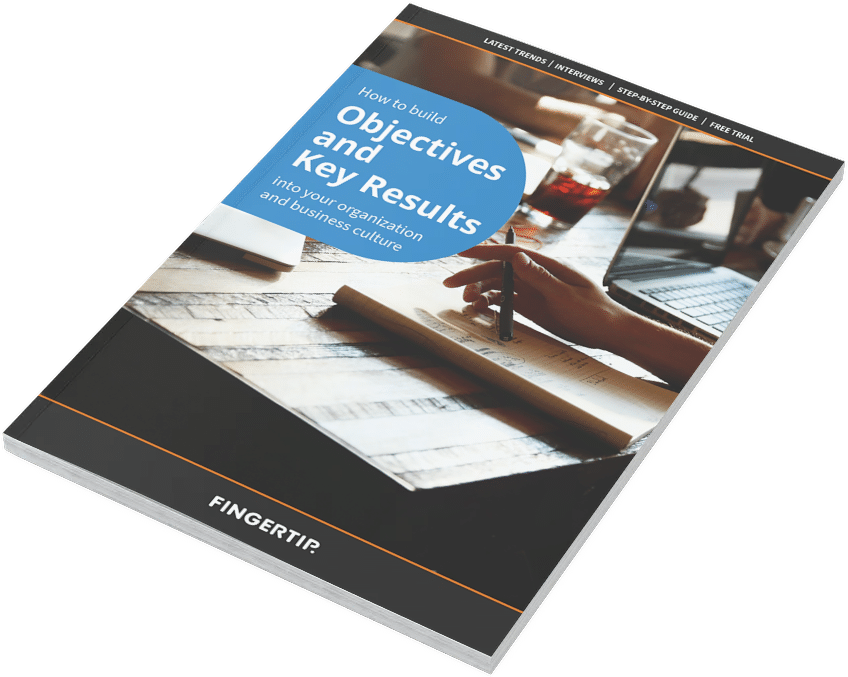 Free whitepaper: How to setup Objectives and Key Results in your business

Objectives and Key Results (OKR) are a tool for measuring individual and organizational progress. They help people with goal setting and motivation.

This whitepaper gives you a broad understanding of objectives management, and how Fingertip enables you to increase focus and alignment using the OKR framework.

Use Fingertip across your organization to tie decision making and strategic planning with accountable execution.

This website uses cookies to improve your experience while you navigate through the website. Out of these cookies, the cookies that are categorized as necessary are stored on your browser as they are essential for the working of basic functionalities of the website. We also use third-party cookies that help us analyze and understand how you use this website. These cookies will be stored in your browser only with your consent. You also have the option to opt-out of these cookies. But opting out of some of these cookies may have an effect on your browsing experience. Read more of how Fingertip handles private information in our Privacy Policy.
Necessary Always Enabled
Necessary cookies are absolutely essential for the website to function properly. This category only includes cookies that ensures basic functionalities and security features of the website. These cookies do not store any personal information. Our necessary cookies include: Google Analytics - Anonymous tracking of website usage, used to optimize website performance and content. No personalization features.
Non-necessary
Any cookies that may not be particularly necessary for the website to function and is used specifically to collect user personal data via analytics, ads, other embedded contents are termed as non-necessary cookies.
Functional
Functional cookies help to perform certain functionalities like sharing the content of the website on social media platforms, collect feedbacks, and other third-party features.
Performance
Performance cookies are used to understand and analyze the key performance indexes of the website which helps in delivering a better user experience for the visitors.
Analytics
Analytical cookies are used to understand how visitors interact with the website. These cookies help provide information on metrics the number of visitors, bounce rate, traffic source, etc.
Advertisement
Advertisement cookies are used to provide visitors with relevant ads and marketing campaigns. These cookies track visitors across websites and collect information to provide customized ads. These cookies include: Google Ads - tracking our online marketing to optimize ad performance. Doesn't collect personally identifiable data. Facebook - Facebook marketing cookie to optimize ad performance. We don't collect any personal data with this.
Others
Other uncategorized cookies are those that are being analyzed and have not been classified into a category as yet.
SAVE & ACCEPT
Powered by